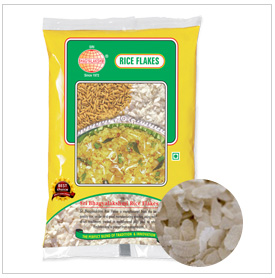 Sri Bhagyalakshmi Foods uses the most advanced machinery in the production of Sri Bhagyalakshmi Poha (also known as Aval or Avalakki) from superior quality rice that is widely consumed in India.
Poha, a flattened rice (also called beaten rice), is a dehusked rice which is flattened into light dry flakes, which originated in the Malwa region of India.
The delicious Sri Bhagyalakshmi Poha -flakes of rice swell up and become thicker when added to hot or cold water or milk. This easily edible and digestible form of raw rice is very popular and a convenient food in most parts of India.
Sri Bhagyalakshmi Foods has pioneered in processing two varieties of premium quality Poha, proven to be the tastiest for the past six decades - one is the Paper Thin flakes Sri Bhagyalakshmi Poha and the other the Thick flakes Sri Bhagyalakshmi Poha.
Sri Bhagyalakshmi Foods supplies the finest Poha to the retailers and confectioners who make dietary snacks, generally served as a breakfast dish, or as a light snack in the evening, popular in most parts of India.
Poha or Rice Flakes is also known as Atukulu in Andhrapradesh, Chuda in Orissa, Aval in Tamilnadu and Kerala in South India. In Karnataka Poha is known as Avalakki, where both the thick and thin rice flakes are popular for preparing snacks. Rice flakes are also popular and commonly consumed in Bangladesh and Nepal.
Pronounced as Pope in Malwa region of Madhyapradesh or Poya in Rajasthan or Poha in Gujarat, has excellent nutritional value and is easily digestible. Hence, traditionally for generations this cereal was used by people during long duration travel, as Rice flakes would not perish fast and also light to carry.
Poha as a cereal is known to be one of the best, and lightest food product that contains low saturated fats, carbohydrates, vitamins A & C, iron, calcium, sodium, potassium and tad bit of sugar that is essential for our health. Poha provides good energy and helps to rejuvenate faster, with the advantage of zero cholesterol, giving it the status of the most preferred cereal that can be consumed by children, adults and senior citizens, as it is soft and easy to chew, and also light on the digestive system.
An interesting fact of this poha cereal is that, it is only cereal that finds a place in cultural, traditional and religious rituals. It is one of the of the most preferred cereals that is offered as a food in most temples across India. Poha soaked in water and then mixed with jaggery to make a simple Prasadam (offering to Gods), which is then distributed to the devotees after the Pooja.
Poha is used to make a variety of delicacies, both as a dessert and as a spicy snack. The delicacies range from simple Jaggery mixed Poha dessert to Poha Kheer, Poha Upma, Poha Bagala Bath, and fried snacks.
Most restaurants, caterers and cafes across India serve Poha dishes as well, as consumers from all walks of life prefer to consume Poha, which is easy on the stomach and also suits for working professionals as a lunch-snack.
Traditionally Poha used to be made with hand using traditional techniques. As consumption increased and as human civilisation evolved, newer methods of processing rice into rice flakes emerged. Demands led to mechanisation of processing rice and rice flakes, with current advancement enabling food processing industries to process rice, sort, clean and pack hygienically, without losing the goodness of Poha. Poha is made with different varieties of rice, based on the region on which it is consumed. Rice flakes are made from White Raw Rice or Red Raw Rice.
Red raw rice is very popular in South india, especially in South Canara district of Karnataka state and Kerala state.
Amongst the many merits of Poha, it is known to be diabetes friendly and also helps in weight loss, making it a favourite snack amongst celebrities, sports personalities and fitness enthusiasts.
Off-late the younger generation is taking to Poha, after some of the leading brands have unleashed a suite of poha products and awareness campaigns on health benefits of Poha.
Superior quality Refined and cleaned Poha is processed by Sri Bhagyalakshmi Foods in the most modern mills to ensure the original taste is retained and nutrition of the rice is preserved. Premium quality Poha is Sortex cleaned and packed in hygienic bags of 1Kg, 5Kg, 10Kg variants of strong quality to store well and avoid breakage of Poha.No Preservatives are used in the preparation. Sri Bhagyalakshmi Poha is one of the leading brands in Poha with a loyal consumer base since decades and growing rapidly.
For over four decades, Sri Bhagyalakshmi Foods has been specialising in Rice Milling, Rice Processing, Wholesale trading of Rice, Bulk Sales of Rice and bulk supply of Rice and Rice Flakes to leading institutions, IT campuses and to large retail brands, supermarket chains and Kirana Stores in South India. Sri Bhagyalakshmi Foods also has expanded it’s business overseas through the export business, by exporting Rice Flakes. With growing awareness about the nutritional value and inherent qualities of Poha, it is indeed going to become on the leading food products the world over. Sri Bhagyalakshmi being a pioneer in processing of rice and rice flakes is well placed to meet the demands and serve the global consumers with superior quality poha and ready-to-eat Poha snacks, which is poised to be the first-of-its-kind.

Sri Bhagyalakshmi Foods is not
a legal entity. It is only a name intended
to represent Sri Bhagyalakshmi
Network of Companies, for the purpose of
this marketing collateral only.